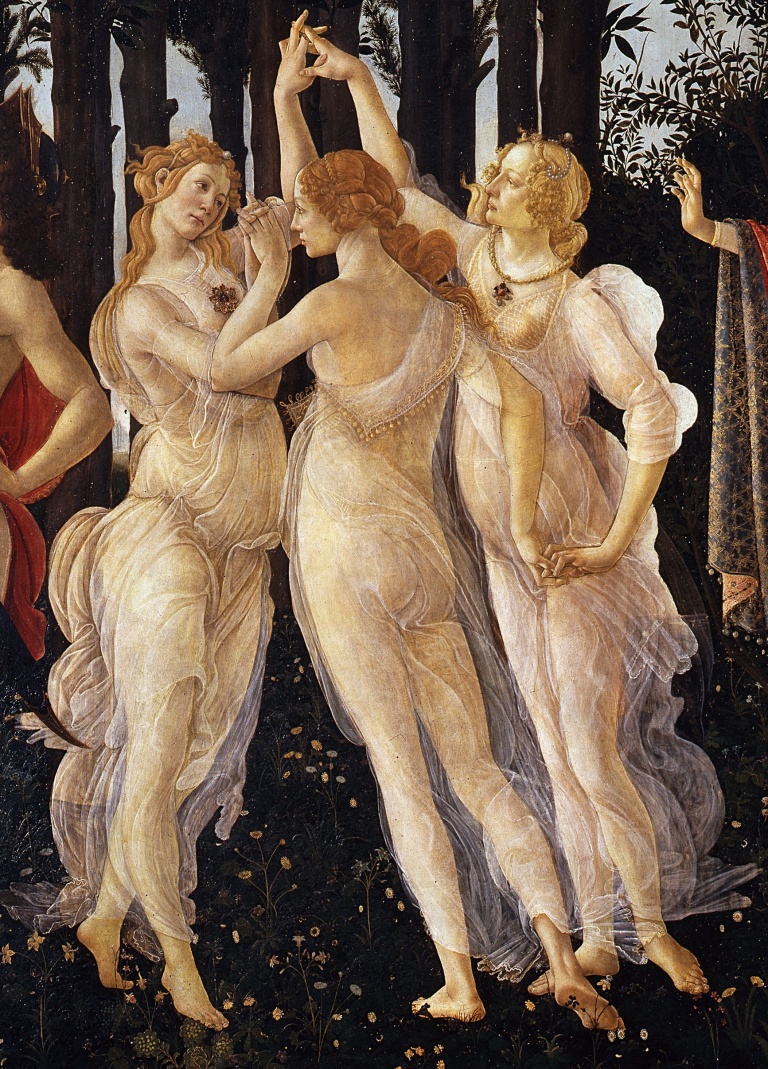 We have seen through the work of Rudolf Steiner that a Divine Feminine Trinity is implied in his teachings and that Anthroposophia is the guide to help us understand such profound mysteries of the future. Two students of Steiner’s, Valentin Tomberg and Robert Powell write about a Divine Feminine Trinity and attribute the source to Cabalistic lore concerning the Tree of Life.  Neither author develops the concept much and does not align their ideas with Steiner’s teachings.  But they were right that Jewish mysticism teaches that there is a Feminine Divine principle that is a trinity.  Jewish Mysticism and the Cabala suggest that there is a Feminine Divine Trinity that works together in concert with a Male Divine Trinity.

Shekinah (Sophia or Wisdom) is called the ‘Soul of God’, the ‘Mother or Origins’, and the ‘Motherly Space.’  There is an inner glory, and that is the Shekinah and the Holy Ghost together.  Shekinah is threefold as ‘Queen’, ‘Daughter’, and ‘Bride of God.’

The Jewish Feminine Trinity is hidden in mysticism.  Every aspect of human nature and the cosmos seem to be parceled into a trinity.  The trinity is found in the human body with thought, air in speech passing through the larynx, and the wedding of thought and speech to spirit.  Everywhere in the human constitution are trinities: thinking, feeling, willing – waking, sleeping and dreaming – body, soul and spirit.  It is only natural, since we are created in the image of the divine, that we also find these trinities in ourselves and the world.

Let’s refer to the sections below from Rudolf Steiner to glean the nature of Sophia.

On the Mysteries of Ancient and Modern Times, Dornach, 26th December, 1917, Lecture 2

These three, — the inspiring Spirit, the Virgin Mother, and the Logos or the Word — must of course be maintained; they must he sought for through Spiritual Science also. And would say, in an Imaginative form did endeavor to point out these things during my recent lectures, when I described the transition from the old Mysteries to the new. I said that Antiquity only got so far with its Mysteries that it was able to revere, in Pallas Athene, the Virgin Wisdom, Pallas Athene is indeed a virgin figure; but within the ancient epoch this Virgin Wisdom did not give birth to the Logos. This is precisely the characteristic feature of ancient Greece, for example; it stops short at the Virgin Wisdom, whereas the new Age passes on to the Son of the Virgin Wisdom — to the Logos, which is there on the physical plane through that which represents it: the human word, human speech or language. For human speech may truly be regarded from the point of view of its connection with Wisdom. In earthly life of man, Wisdom lives itself out through human thought. The air that is breathed out through our larynx, configured through our larynx and its movements, is wedded to the Wisdom that dwells in our thoughts; and the content we have to express is the inspiring Spirit. Every time you speak — no matter how profane the impulse of your speaking is — you have expressed earthly representation of the Trinity. The thought in your head, and the configured air that passes through your larynx, — these two are wedded and united under the influence of the Spirit (that is to say, when you are voicing things of the sense-world, united by the percept itself).

It is indeed the earthly expression of the Trinity. And the Divine, the spiritual Trinity, must stand behind it, — the all-embracing Wisdom which becomes Teaching for mankind, and which expresses the Universal content. Anthroposophical Spiritual Science cannot admit or confess its faith in any earthly constitution; for an earthly constitution, whatever it might claim, would be unfolding mere claims of power. Anthroposophical Spiritual Science takes the Virgin cosmic Word in real earnest.

If we think in the sense of anthroposophical Spiritual Science, then, in this content of all that is brought forward by this Science, we see not a mere sum of abstractions or abstract ideas but a living entity that fills us and infills us; For it can even fill us in our soul with active impulse. Thus it becomes the Word, the Teaching, not in a mere scholastic sense. For spiritual-scientific Wisdom grows to be of service in the social life. The Word itself becomes of social service, and the content which it expresses — brought down from super-sensible worlds into the world of sense, so to be the underlying basis of our impulses of action — is the inspiring Spirit. Thus I would say: We look for Pallas Athene, the Virgin Wisdom, the Virgin Wisdom of the Cosmos; but we also look for the Son who is born of her, who finds expression in this: that in all the things we do and will in the social life, the Virgin Wisdom is working with us, giving us that which becomes the guiding impulse of our willing and our doing. Then we express the Spirit — the Holy Spirit, the Supersensible — in our sense-perceptible actions on the physical plane.

Let us now consider another scene in this Gospel. In (John 19:25), we read: “Now there stood by the cross of Jesus, His mother, and His mother’s sister, Mary the wife of Cleophas, and Mary Magdalene.” If we wish to understand this Gospel it is necessary to know who these three women are. We do not usually give two sisters the same name; neither was it the custom in former times. The passage we have quoted proves that, according to St. John’s Gospel, the mother of Jesus was not called Mary. If we search through the whole of this Gospel we nowhere find it said that the mother of Jesus was called Mary. In the scene of the Marriage of Cana, for example, Chapter 2, we only read, “the mother of Jesus was there.” In these words something important is indicated, something we only understand when we know how the writer of this Gospel uses his words. What does the expression “the mother of Jesus” mean? We have seen that man consists of physical, etheric and astral bodies. We must not consider the transition of the astral body to the Spirit Self so simply. The Ego transforms the astral body very slowly and gradually into sentient soul, intellectual soul and spiritual soul. The Ego goes on working and only when it has developed the spiritual soul is it able so to purify it that Spirit Self can arise in it.

The Spirit Man will only be developed in the distant future, and Life Spirit is also only germinal in most people of the present day. The development of the Spirit Self has only just begun; it is closely united with the spiritual soul (somewhat like a sword in its sheath). The sentient soul is similarly united with the astral body. The human being thus consists of nine parts or principles; but as the Spirit Self and the spiritual soul, and the sentient soul and the astral body are so closely united, we often speak of seven parts. Spirit-Self is the same as the “Holy Spirit,” who according to esoteric Christianity, is the guiding Being in the astral world. According to the same teaching, Life Spirit is called the Word or the Son; and Spirit Man is the “Father Spirit” or the “Father.”

Those human beings who had brought the Spirit Self to birth within them, were called Children of God; in such men “the light shone into the Darkness and they received the light.” Outwardly they were, men of flesh and blood, but they bore a higher man within them; the Spirit Self had been born within them out of the spiritual soul. The “mother” of such a spiritualized man is not a bodily mother, she lies within him; she is the purified and spiritualized spiritual soul; she is the principle who gives birth to the higher man. This spiritual birth, a birth in the highest sense, is described in St. John’s Gospel. The Spirit Self or the Holy Spirit pours into the most highly purified Spiritual Soul. This is referred to in the words, “I saw the Spirit descending from heaven like a dove, and it abode upon him.” (John 1:32).

As the Spiritual Soul is the principle in which the Spirit Self develops, this principle is called the “mother of Christ,” or, in the occult schools, the “Virgin Sophia.” Through the fertilization of the Virgin Sophia the Christ could be born in Jesus of Nazareth. In the occult school of Dionysius, the Intellectual Soul was called “Mary,” and the Sentient Soul “Mary Magdalene.”

Mary Magdalene represents the process of cleansing the astral body to develop new organs of supersensible perception.  That is why the spiritual scientist must understand and move through this stage of spiritual development.  Conquering the desires of the astral body is a necessary stage of renunciation and purification.

If he were to notice this desire to be Mary Magdalene then he would be sensible and assume toward this desire the same attitude as toward a pain — namely, he would try to get rid of it. But through an irregular descent into sub-consciousness, this does not take place, because his desire acquires the form of something which is outside his own personality, and to the man in question it appears as the vision: “You are Mary Magdalene”. This fact stands before him, is projected outside his own being. Moreover, a human being at this stage of development is no longer able to control such a fact through his Ego. This lack of control cannot arise when we undergo a regular, sound and absolutely careful training; for then the Ego accompanies all experiences in every sphere. But as soon as the Ego no longer accompanies all our experiences, the fact described above can arise in the form of an objective outer happening. The observer believes that he can remember the events connected with Mary Magdalene and feels himself identified with this Mary Magdalene. This is unquestionably possible. I emphasize this possibility, because it shows you that only a careful training and the conscientiousness with which we penetrate into occultism, can rescue us from falling into error. If we know that we must first see before us an entire world, that we must see around us facts, not something which we apply to our own selves, but something that is in us, and yet appears like the picture of a whole world — if we know that we do well to consider what we first see before us is the projection of our own inner life — then we possess a good shield against the errors which can beset us along this path. The best thing of all is to consider at first everything that rises out of our inner being as if it were an exterior fact. In most cases these facts arise out of our desires, vanities, and ambition — in a few words, out of all the qualities connected with human selfishness.

Posted by Our Spirit