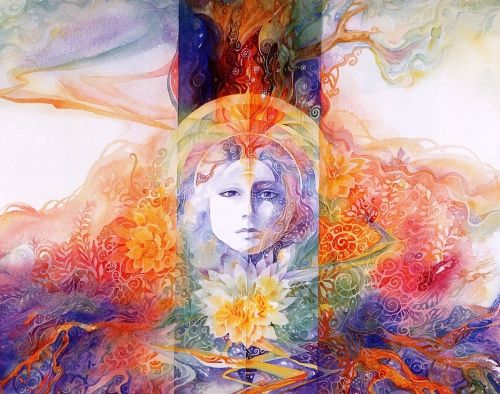 Once you enter the Inner Sanctum of the Temple of Wisdom, the Divine Feminine Trinity, Sophia as Mother-Daughter-Holy Sophia, unveils Her mysteries to seekers of Wisdom. The soul has found her spiritual home. When we receive Sophia’s Grace, it can appear or be experienced as a blinding light, filled with overwhelming love and wisdom-light. If you have had this experience, which Rudolf Steiner indicated would happen to more and more of us in contemporary times, you might liken it to a “Damascus experience or event,” wherein the Being of Love, Christ, manifests His mercy.

Christ and Sophia work as one. Sophia is the Wisdom that illuminates the cosmic aspects of Christ’s love manifesting in human spiritual evolution. It is Sophia who helps lead us to the Island of the Blessed, guiding us over the bridge, helping us avoid the temptations of the fruit of the Tree of Knowledge and instructing us through the revelations found in the harmonies of the Temple of Wisdom. It is Sophia, as a spiritual mid-wife, who helps us cross the doorway into the outer sanctum where we prepare ourselves for the sacred meeting with Christ Himself upon the altar of Sophia in the most Holy of Holies.

The authors crossed this threshold and it took many years to “unpack” the revelation and put it into words and forms that would be accessible for others to embrace. For Douglas, the experience unfolded itself through the wisdom and teachings he researched as a life-time scholar of Sophia, from his special assignment as a Jesuit scholar to his time as a Waldorf teacher. Many readers are especially delighted to read of Douglas’ involvement in the initial development of the Star Wars and Indiana Jones movie treatments where the teachings of Rudolf Steiner, Anthroposophy, are revealed in the scripts, characters, and themes of both movies.* Because of his influence in these movies, Douglas has introduced countless people to the nature of the spiritual world in the form of storytelling and fairytales….just as Waldorf teachers love to do!

The experience came for Tyla as an unanticipated blinding light full of love and grace as she stood in a circle of other spiritual seekers in October 1984 near Clearwater, Florida. Although the attendees could not see what she saw with etheric vision, they realized its intensity and heard Tyla describe a vision of overwhelming love and light. “Like the light described in Saul’s conversion on the road to Damascus,” she said to her friends, then and for many years thereafter. Her experience took decades of spiritual study to comprehend, with her goal being able to one day translate the Damascus experience into a form that others could comprehend.

Over the years, many people asked the Gabriels, separately and together, to write about their spiritual journey, but it was not until July 27, 2014 that they were prepared to come out publicly with their teachings of Sophia Christos.

The experience of Sophia Christos, also known as the etheric Christ event, could not be described in the pages of an ordinary book. Its full expression needed to have a medium that transcended time and space, like the digital wings of the Internet, reaching beyond our hearts and traveling into yours no matter where you are in the world. Now, more than ever, we have the medium that comes close to revealing the revelation, the gospel, and good news of Sophia.

This digital or etheric Temple of Wisdom is free for all seekers of the spirit and it augments what is offered in the trilogy of The Gospel of Sophia and the materials offered on the OurSpirit website. The site is tantamount to the digital building of a Temple of Pansophia where wisdom is enshrined in a holy and sacred atmosphere. Many stories, verses, narratives, videos, poems, morality training, fairytales, artwork, and other praise of Sophia are offered to help lead the aspirant to the “northland” consciously. Once Sophia has taken your hand and heart, She will lead you closer to the island and the bridge across the river. Only the seeker’s moral development can help him consciously cross the bridge to the island because immorality is too heavy for the bridge to sustain, and a person tinged by fear, doubt or hatred will sink into dreamless sleep, never consciously ready to take Sophia’s hand across the bridge.

After surmounting the temptations in the garden and learning a new language of the spirit written on the outside of the Temple, the aspirant cleans and purifies her outer and inner nature before entering the Inner Sanctum to directly witness Sophia unveiled. But the Inner Sanctum will only reflect what the aspirant has gained as wisdom through her higher thoughts, feelings and deeds. These higher qualities are called Imagination, Inspiration and Intuition and are the refined soul qualities of thinking, feeling and willing. The light of the soul can only illuminate what the aspirant has gained through seeking Wisdom/Sophia in all things. The collective Wisdom of the aspirant acts like a lamp that shines upon the Inner Sanctum revealing the cosmic script found displayed in columns of virtue that hold the dome of the sky above which is filled with the sparkling fires of the stars that now ring out with cosmic harmonies that uphold the wise structure of the temple.

All aspects of the Temple of Wisdom are found in the human body and its magnificent composition. Sophia and Christ are also found in the human heart working together to individually further each person’s spiritual evolution. It takes time and effort to seek and find the wisdom to understand the gift of love that Christ and Sophia brought to humanity. Gaining this wisdom is like gathering the rough building stones that must be magically carved into “living stones” that are used to build our personal edifice of wisdom in the spiritual world. Some aspirants build huts while others build temples or libraries. Some are humble and simple while others are grand and filled with magical truths and wisdom symbols glowing in living letters on the columns and walls. Each person builds and dwells in his own abode in heaven through their deeds of love.

OurSpirit offers many pathways to the Island of the Blessed, as well as virtuous instruction to enhance the moral consciousness needed to cross the bridge between the physical and spiritual worlds. The letters of the “language of spirit” are written throughout all of our books, articles and poems so that the aspirant might recognize the teachings on the outside of the Temple of Pansophia. But it is a personal relationship with Sophia that is needed to enter the Temple of Wisdom and prepare for the Inner Sanctum where Sophia Christos is the living grail of nourishment that feeds the soul and spirit of the aspirant. This site is a replica, or reflection, of that living temple of truth and wisdom that is the home of Sophia Christos.

The Temple of Wisdom that is described from many different vantage points in the work of OurSpirit is an invitation to the spiritual wedding feast of your soul to your higher self – your virgin soul (Sophia’s wisdom) to your higher “I Am” (Christ’s love).  It is this wedding of Sophia and Christ that is the archetypal example of what the wise aspirant mirrors in her soul and spirit. Once the aspirant has entered the Inner Sanctum, the Temple of Wisdom and Love is born anew in the aspirant’s heart. Truly a wedding transpires in the temple and the sacred union brings nectar and ambrosia as a banquet feast for those who have lifted the veil of nature and found the Wisdom of Sophia that ushers in the Love of Christ. Thus, Sophia Christos is born in the heart of hearts, the most Holy of Holies, of the aspirant who consciously chooses to dwell in the Temple of Wisdom.

* Read about Douglas’ involvement in assisting Marcia Lucas with the character and theme development of Star Wars and Kathleen Kennedy’s treatment of Indiana Jones, along with his other movie influences, on the Neoanthroposophy page at OurSpirit.com.

Posted by Our Spirit